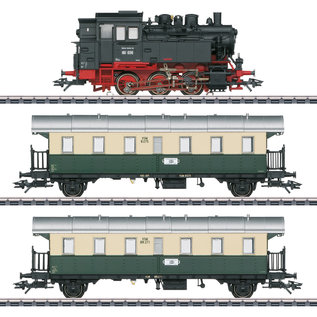 Prototype: Train set consisting of a Veluwsche Stoomtrein Maatschappij (VSM) class 80 steam tank locomotive in Apeldoorn, Netherlands and two two-axle passenger cars to go with it. Locomotive road number 80 036. The train looks as it does after the planned overhaul of the locomotive in 2021.

Model: The locomotive has an mfx+ digital decoder and extensive sound functions. It also has controlled high-efficiency propulsion. 3 axles powered. Traction tires. The triple headlights change over with the direction of travel, will work in conventional operation, and can be controlled digitally. Maintenance-free warm white LEDs are used for the lighting. The locomotive has many separately applied details. The passenger cars have separately applied open platforms and walkover plates. Total length over the buffers approximately 43 cm / 16-15/16".

One-time series to support the overhaul of the original locomotive. Exclusive model for the Netherlands.